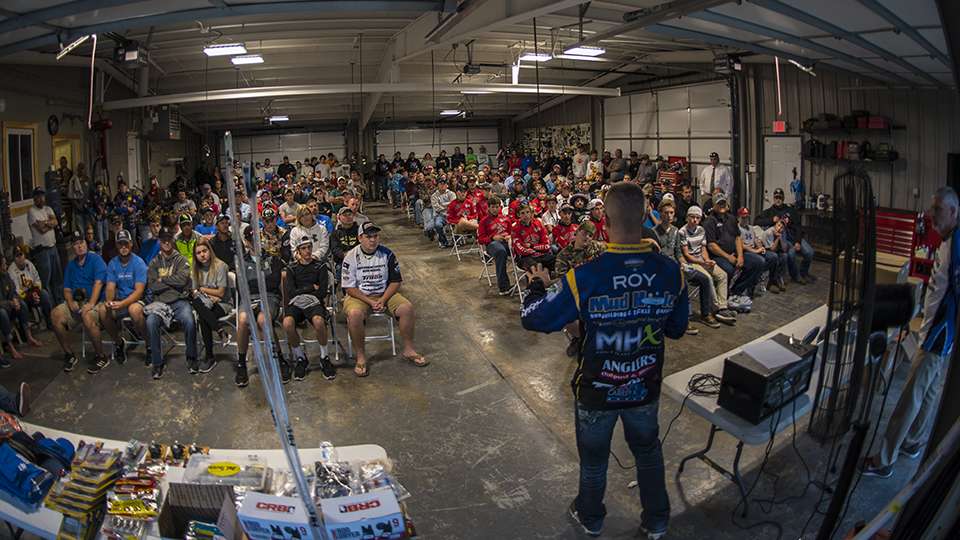 In today’s fishing world it can be hard to keep up. Every time we turn around as anglers there is new bait or technique on the market that you supposedly just can’t catch fish without. New programs or tournament trails are no different. It’s hard to decide what to fish at times because as anglers we have so many choices. Although there may not be anything wrong with these different programs, I really can’t say that the majority of them actually benefit our sport. By benefit I mean produce better quality fisherman that will be long term supporters of this wonderful thing we call competitive fishing.

Although having been around for a few years, sanctioned high school fishing is really starting to catch on as of late. Being the youngest on the Bassmaster Elite Series at the old age of 24 now, high school really isn’t that far away for me. I have taken a hands-on approach with it because I feel like I can relate with these young up and coming fishermen. Working with different teams on detailed aspects of fishing and even hosting my own high school open tournament, I’ve learned what high school fishing is all about. With high schools finding coaches and starting their own teams and the number of actual high school aged anglers growing, it’s hard not to get excited about where this program is going.

In my eyes high school fishing is a win-win situation. It benefits both the young angler and those that make their living in the fishing industry.

For most of my life I thought being a good tournament fisherman was all about being able to catch as many bass as KVD or at least catch more than the other guys fishing against me in that tournament. Although that is true and very important at times, there are also certain aspects of tournament fishing that an angler must learn to help themselves beat other competitive anglers. Let’s face it – I can catch 20 keeper sized bass in a day but if I don’t know how to go through and cull the smallest ones out it really won’t do me a lot of good. Now I know that seems like such a simple thing to most of us that have fished any tournaments at all, but effectively culling through bass under a time crunch while your boat blows around aimlessly in the wind is a skill that we all had to learn at one point.

The good thing about high school fishing is that anglers can learn what seem like simple tasks to veteran tournament fisherman, at early ages and with the help of an experienced coach. It doesn’t stop at culling either, we are teaching them how to calculate and be back to the weigh in on time, how to fish around other anglers on the water, line and lure choices, and even how to run a trolling motor just to name a few. All these things will benefit them by giving them a base to build off of and make them better well rounded tournament anglers, because remember we aren’t just going fishing. This is competitive tournament fishing, quite different than fun fishing at your local farm pond.

We know it helps the high school anglers, but what about those who make their living in the fishing industry? In my opinion it will be nothing but great for them as well. I’ve seen it, these high school students vary greatly in experience and skill when they join their local teams. One thing is for sure regardless of skill, everybody needs tackle and a way to get to the fish. That’s where my sponsors and all of the other fine companies that are involved in the industry come in. They get to sell product to a new customer and one that will likely be in it for the long haul. Sure some of them will likely give up and move on to something else like most teenagers do, but a majority of them will be hooked. No pun intended. Obvious needs will be fishing tackle, but it won’t take long before they realize they need one of these Triton Boats with a 250 Mercury Optimax and so the process will begin.

With all that being said, I feel that everyone should be eager to see where the high school fishing level goes and to watch it benefit us as a group. If you are a high school student athlete and interested in fishing I encourage you to find out if your school has a team and if not learn how to begin the process of starting one. For all of us anglers that are wishing our high schools would’ve had a team, it’s time for us to get involved. Find out if your local school has a team and if they do see if how you can help out. In most cases they need boat captains for their tournaments. It can be a fun way to get involved and help teach some young student athletes to fish. You never know though, they might teach you something!

Bradley Roy is a 5 year veteran of the Bassmaster Elite Series and won the 2010 Rookie of the Year award. Find more at www.BradleyRoy.com and www.Facebook.com/ProBradleyRoy.